"But ye are a chosen generation, a royal priesthood, an holy nation, a peculiar people: that ye should shew forth the praises of him who hath called you out of darkness into his marvelous light."  I Peter 2:9

In 1999, Chosen was organized to participate in a Music Ministry Workshop in Ada, OK at Reaper Baptist Church. It is very important to note, that there is a great need in Oklahoma and throughout the world for choir members, musicians, directors, percussionist etc. to understand the seriousness of their role and purpose, as part of the worship experience and ministering to people in song.

A long time "vision" of Linda Harrell (to conduct workshops all over the world concerning the Ministry of Music), was expressed to Rev. William and Rev. Barbara Gray. Minister Barbara Gray (who is now deceased) was the sponsor of all the choirs at Reaper Baptist Church. She too expressed the same concerns and need for the choirs at Reaper Baptist Church to have a Music Workshop. Thus, was the beginning of scheduling, planning, and organizing the first workshop on the Ministry of Music. It is important to note, that because the choir only sung with soundtracks; the idea of forming a group to record a soundtrack occurred. Under the guidance and direction of the Holy Spirit the following has been accomplished:

March 1, 1999:  The soundtrack was completed on the first Sunday, titled "All Praise To God".

March 14, 1999:  "Chosen" performed in concert at Reaper Baptist and performed using the soundtrack, for the first time.

August 21, 1999:  The same workshop was conducted at Bethlehem Star Baptist Church, for an Appreciation Musical.  This was the second time "Chosen" performed, this time without the soundtrack.  Since then the soundtrack has been converted into a CD at the Music Group Studio.

April 2009:  Chosen Appears on the Radio for the first time on KTLV.

Johnson" at the 2nd Anniversary Musical, held at Independent Church of the Living God Worship Center.

December 15, 2012:  Advertisement in OKC Herald newspaper with flyer about the release of the CD, "Christmas With Chosen."

August 12, 2013: For Immediate Release Follow-up on the 1st All City Wide Music Workshop in the Oklahoma Christian Herald.

December 1, 2013:  Released the Soundtrack Volume 1 - From Christmas with Chosen CD; featuring the songs "He's Done Enough" and "Go Tell It on the Mountain".

June 24-27, 2015: The 2nd All City Wide Music Workshop & Concert with guest clinician, Dennis Scott. This event was held at the Church of the Living God Ministries. 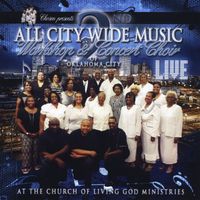 March 18, 2017:  Chosen Celebrating their 18th Anniversary in a Musical at Pilgrim 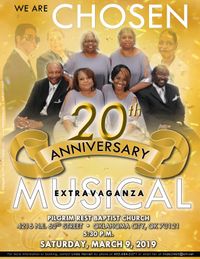 March 9, 2019:  Chosen Celebrating their 20th Anniversary in a Musical at Pilgrim Rest Baptist 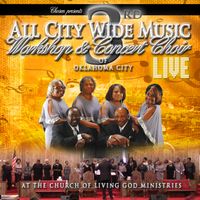 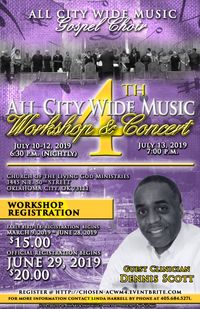 July 10-13, 2019:  The 4th All City Wide Music Workshop & Concert with guest clinician, Dennis Scott. This event was held at the Church of the Living God Ministries.

TO GOD BE THE GLORY FOR THE THINGS HE HAS DONE AND IS DOING WITH CHOSEN.